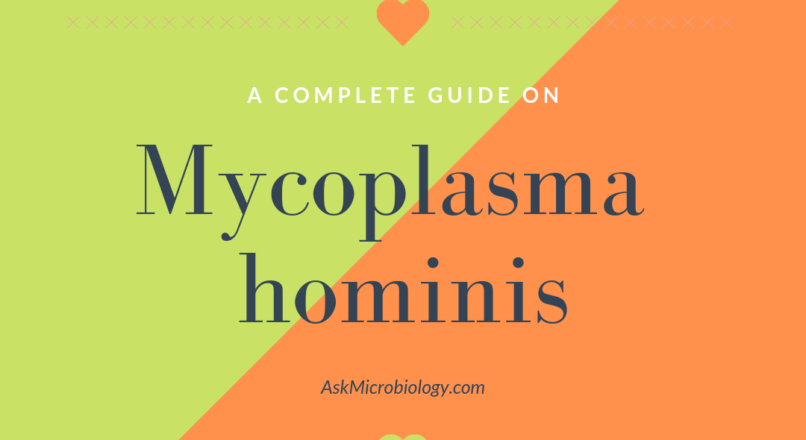 Mycoplasma hominis are obligate parasites. They are dependent on external cholesterol source for the synthesis of their plasma membrane. So they need their host for the synthesis of plasma membrane and growth. They are dependent on host for getting most of their compounds. They require especial growth requirements and hence special media for their growth. 5 to 10 % of Carbon dioxide is required for their growth. Mycoplasma hominis can grow on glucose agar medium giving fried egg colonies within 24 to 48 hours. It’s energy metabolism is dependent on arginine degradation while other mycoplasmas don’t have this characteristics.

The first Mycoplasma hominis was mainly involved in causing pelvic inflammatory disease. Mycoplasma hominis recovery from human was done directly in 1937 from a pathological condition. It was discovered from an abscess of Bartholin’s gland. After that its isolation and identification was made.

Mycoplasma hominis is an important pathogen of humans and is only present in humans. Its classification is as follows;

Mycoplasma hominis is present in the urogenital tract of half of the females and fewer males. They are opportunistic pathogens. It can be transmit from mother to offspring during childbirth. It can also be transmit from one partner to other during sexual intercourse. If one partner is suffering with the disease it can transmit to other partner during sexual intercourse. Its transmission is more like the transmission of STDs.

Mycoplasma hominis attach to the ciliated and non ciliated epithelium of urogenital tract. Mycoplasma hominis has certain adherence antigenic molecules which help it in cytoadherence. Main adhesion protein is P1 which attaches to sialoglycolipids and sialoglycoproteins receptors present on epithelium of urogenital tract. It produces hydrogen peroxide which causes cell damage. There is immune response at sight of infection and inflammation occurs. In bacterial vaginosis due to high pH the number of Mycoplasma hominis also increases.

Mycoplasma hominis is mainly involved in causing Pelvic inflammatory disease and pyelonephritis but it can cause following complications too.

It is also present in polymicrobial infections. It has a strong association with Ureaplasma urealyticum. Both can be present in pregnant female and can be transferred to offspring.

Mycoplasma hominis can be diagnosed by using culturing method. It gives fried egg colonies on glucose agar medium. vaginal or urethral fluid or its swab is taken as a sample for culturing and diagnostic purposes. PCR is available for Mycoplasma hominis but it is available very less on commercial scale. It can also be diagnosed by using serological testing.

It can be prevented by adapting following preventive measures: