Ever experienced food poisoning after eating some reheated fried rice, the reason may be this naughty microorganism’s entry into your gastrointestinal tract. Bacillus Cereus, not the only one but is one of the leading causes of food poisoning. Bacillus Cereus is an aerobic, motile and facultative anaerobe which also shows the property of beta hemolysis.

The organism is transmitted to humans via food mainly rice kept at room temperature or reheated rice. Infection caused by rice contaminated with Bacillus Cereus is also called “fried rice syndrome.” Mainly the spores of this bacteria survive steaming and thus germinate when the rice is kept warm for many hours. This is because they get favourable conditions in that case. 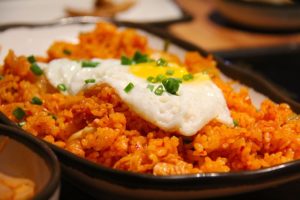 Although, most of the times medication is given according to symptoms but Bacillus cereus if gram stained shows that it is a gram-positive rod-shaped organism. Thus purple rods are seen under a microscope.

The symptoms of Bacillus Cereus infection are severe nausea, diarrhoea, vomiting and abdominal cramps. The disease usually lasts for 24 hours.

Bacillus cereus produces two enterotoxins. One act by ADP-ribosylation to a G protein and thus leading to an increase in cyclic adenosine monophosphate (this is happening in the enterocytes). The other enterotoxin acts as a superantigen.

On the basis of incubation time, the syndrome is also of two types as per the clinical findings are concerned.

Short incubation form is the one which shows the symptoms of nausea and vomiting within a short span of time, i.e. 1 hour to 5 hours, however for simplicity, generally, 4 hours is mentioned in the literature. This form is also called the emetic form.

Long incubation form is the one which shows watery, non-bloody diarrhoea in 8-18 hours. However, 18 hours is used as a general term.

Laboratory Diagnosis is usually not done for this bacteria and treatment is generally given on the symptomatic basis.