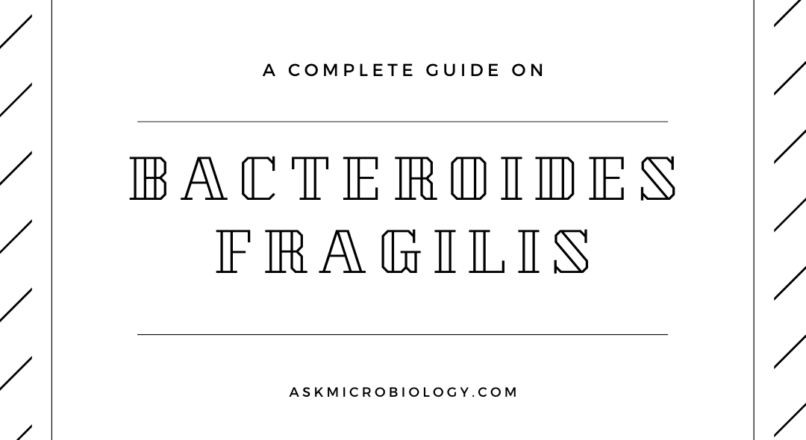 Bacteroides fragilis is a Gram negative pleomorphic rod shaped bacteria. It is an obligate anaerobic, non-spore forming, non-motile bacterium. Bacteroides fragilis is a normal inhabitant of human colon but if it is displaced and spread to other surrounding tissues or blood stream it can cause disease. It is a catalase and indole positive bacteria. Among the clinical infections of class Bacteroidaceae B. fragilis is the most common recovered specie.

Bacteroides fragilis is a Gram negative bacterium. It is an anaerobic counterpart of E. coli. On blood agar it grows well and gives black brown hemolytic colonies in 3 to 5 days. It can also grow at 20% bile concentration which is a distinguishing microbiology tool help in distinguishing from other genera. On Bacteroides-bile-esculin (BBE) agar it gives dark colonies with brown black halos due to esculin hydrolyzing. It is a non spore forming bacteria but when is observed under microscope it contains large vacuoles which appear smiliar to spores. B. fragilis is a catalase positive and variably Indole positive too. Although it is a Gram negative bacteria but it does not produce endotoxin due to the altered LPS.

Following are the infections caused by Bacteroides fragilis:

B. fragilis is also involved in causing pericarditis, endocarditis, meningitis, appendicitis and inflammation of throat.

Bacteroides fragilis is a common inhabitant of human mucosa. If the bacteria is displaced and transferred to any other body tissue it can cause disease of that tissue. Displacement could be due to trauma, cut, burns, penetration of foreign objects or through improper surgical practices. Invasion of organism by its own is not yet reported.

The pathogenicity results due to the production of capsule. Its capsular polysaccharide protects it from phagocytosis also it has role in starting abscess formation. Bacteria poses fimbriae and pili which promotes its adhesion. B. fragilis also produce an enterotoxin known as Bacteroides fragilis toxin (BFT) or fragilysin. The toxin is a zinc mettaloprotease. It has an altered LPS so there is no endotoxin production and is Gram negative bacteria so it does not cause toxic shock syndrome. B. fragilis produces multiple enzymes like hemolysin, protease, peroxidase, collagenase, heparinase, hyaluronidase and neuraminidase. Production of catalase and superoxide diamutase are additional virulence factors.

Following are the clinical manifestations of Bacteroides fragilis:

Further complications caused by B. fragilis include endocarditis, pericarditis, vascular graft infections, septic arthritis and osteomyelitis. B. fragilis is a component of mixed microbial infections resulting in brain ascess. In the absence of brain abscess in neonate B. fragilis also causes meningitis which is the inflammation of meninges the membranes protecting the brain and spinal cord.

Bacteroides fragilis can grow on 20% bile salt concentration which is a distinguish character of it. Gram staining and growth on blood agar and Bacteroides-bile-esculin (BBE) agar is used for isolation and presumptive identification . It is a catalase positive and variable indole positive bacterium. Bacteria can ferment glucose, lactose, maltose and sucrose. B. fragilis is unable to ferment rhamnose, arabinose, salicin and trehalose. Rapid identification kits and individual fermentation reactions are used for identification of B. fragilis. For checking intra-abdominal infections computed tomography (CT) and ultrasound is done.

Bacteroides fragilis produce beta-lactamase so it is resistant to penicillin. It also develop resistant against clindamycin which was used for its treatment. Due to clindamycin resistance it is not used now as first line treatment for B. fragilis. The organism is also resistant to aminoglycosides. More than 80 % Bacteroides spp. are resistant to tetracyclines now.

Following are the preventive measures for Bacteroides fragilis infections:

There is currently no available vaccine for B. fragilis.