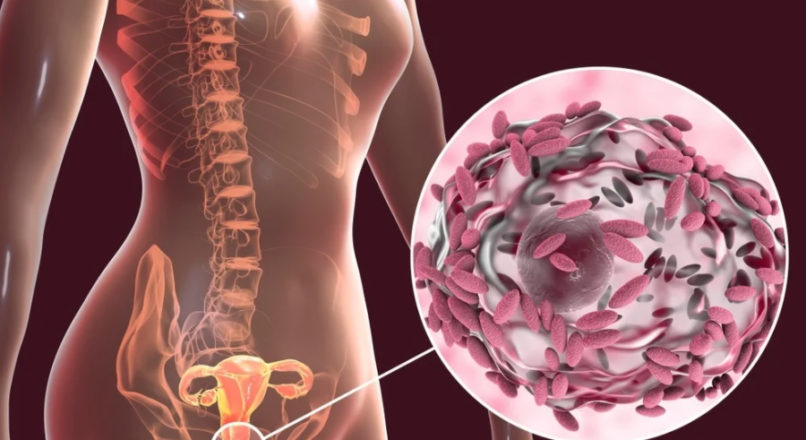 Imagine a small peaceful community where the good guys dominate, spreading smiles and promising wellbeing for everyone. They keep a check on everybody and make sure that everything is in order. Suddenly a calamity befalls and there they are, the bad guys shouting voila on availing the opportunity as they take over. The era of gloomy skies begins and the struggle of colonization by the evil guys finally comes to an end. In reality, our organs and tissues are no different than any real community. Just like the good and bad fellas in our society, we have both, the good and the bad bacteria in our body. There are certain moments where the bad bacteria take over and bingo, we get an infection!

Bacterial Vaginosis (abbreviated as BV) is a bacterial infection of the vagina. It is caused by the imbalance of the “good” bacteria. The overgrowth of certain anaerobic bacteria disrupts the natural flora and hence causing a natural inflammatory response. There is a profound switch in vaginal microbiota to a diverse and large amount of anaerobic bacteria from a protective Lactobacillus dominant state. The overgrowth of bacteria is also associated with an unchecked increase of pH of the otherwise healthy vagina.

While the infection involves multiple types of bacteria, a majority of the infections initiate with Gardnerella vaginalis which allow opportunistic bacteria to take over and take over. Other bacteria include Atopobium vaginae, Mobiluncus spp, Prevotella spp etc.

Since STDs are a result of external pathogens introduced in the body, therefore, Bacterial Vaginosis which is caused by bacteria already present in the body is not considered to be a sexually transmitted disease. A profound change in the pH of the vagina due to acidic bacteria or compromised immunity can cause disequilibrium of the natural flora and lead to a reduction in the capability of the body to reverse the changes back to normal.

Women of age group lying between the mid of first to the third decade of life are exposed to greater risk of contracting BV.

Ethnic factors also contribute to increased risk as African-American woman are double the times at risk to develop BV than an average white woman in the U.S. Other common factors that increase the risk of BV include unsafe oral, vaginal, or anal sex, multiple or new sex partners, smoking and the use of intrauterine devices (IUDs). Having a homosexual partner almost doubles the risk of getting BV. Hereditary factors also play their role, either by stimulating inflammatory response or by decreasing the amount of Lactobacilli which protects the vagina by keeping the environment normal. Another major risk factor is douching of the vagina. Since vagina is self-cleaning, the use of cleansing agents upsets the natural environment leading to overgrowth of anaerobic bacteria. Vaginal douching is now therefore strongly discouraged by many doctors and the health authorities as it can lead to many complications which can otherwise be prevented.

Generally, patients with Bacterial Vaginosis present with a smelly vaginal discharge. The colour of the vaginal discharge may look greyish white or yellow. The vagina has a characteristic “fishy” odour, which may get worsened after sexual intercourse. Sometimes there may be vaginal itching and a burning sensation during urination. Rarely, a BV infection develops complications which include problems in urination, discomfort in sexual intercourse and may lead to developing the pelvic inflammatory disease. However, a large number of women with bacterial Vaginosis who have bacterial vaginosis report no apparent symptoms( approximately 50%).

What will happen if BV left untreated?

Although the severity of symptoms is rarely high, sometimes if left untreated, they can greatly alter the normal physiology of vaginal tissues decreasing its ability of normal protective immune response and thus increasing the susceptibility to contracting many sexually transmitted diseases (STDs) such as gonorrhoea, trichomoniasis, HIV etc.

Do BV can cause miscarriage:

Also, if this infection occurs during pregnancy it can lead to increased risk of preterm delivery and rarely can cause miscarriage in the second trimester. Postpartum endometritis is also sometimes reported.

Moreover, it hinders the chances of implantation in infertile women who are undergoing the treatment of in vitro fertilization and increase the risk of miscarriage if implantation does occur.

For making an accurate diagnosis for Bacterial Vaginosis the doctor will be taking in account a detailed medical history including asking about any previous vaginal infections or any other sexually transmitted infections. After recording the history, the doctor may proceed towards pelvic examination. During the examination, the doctor checks the patient’s pelvic area visually and physically to check for any possible abnormalities. A sample of vaginal secretions will be taken for examination of the secretion for vaginal cells surrounded by bacteria labelling them as clue cells as they indicate the presence of BV.

Gram staining procedure may also be done to confirm the diagnosis. pH strip can be introduced in the vagina to check for the acidity of the vagina as pH of 4.5 or greater is an indication of the presence of this infection. The whiff test if positive, which is the presence of odour during the procedure of examination is another factor leading towards the diagnosis of Bacterial Vaginosis.

The Amsel Criteria is usually followed when formulating a diagnosis. The criteria include greyish yellow discharge, the presence of vaginal cells covered in bacteria namely the clue cells, increased pH of the vaginal secretion i.e greater than 4.5 and a positive whiff test. Presence of these signs leads to the confirmed diagnosis of Bacterial Vaginosis.

Due to the similarity between symptoms of bacterial vaginosis and other infections, further investigations may be carried out if the test results are not conclusive. Common differential diagnosis includes candidiasis (yeast infection), cervicitis, trichomoniasis (an STD) or any other STD like chlamydia. These further investigations will help the doctor to arrive at a final accurate diagnosis.

Bacterial Vaginosis is usually treated with antibiotics. Metronidazole or clindamycin are prescribed as the first line therapy since they are highly effective with minimal side effects. The dose of metronidazole is taken orally and can also be topically applied in the vagina in the form of a topical gel.

The side effects include nausea, vomiting and other GI disturbances that can be minimized by the avoidance of consumption of alcohol during the course of the treatment. 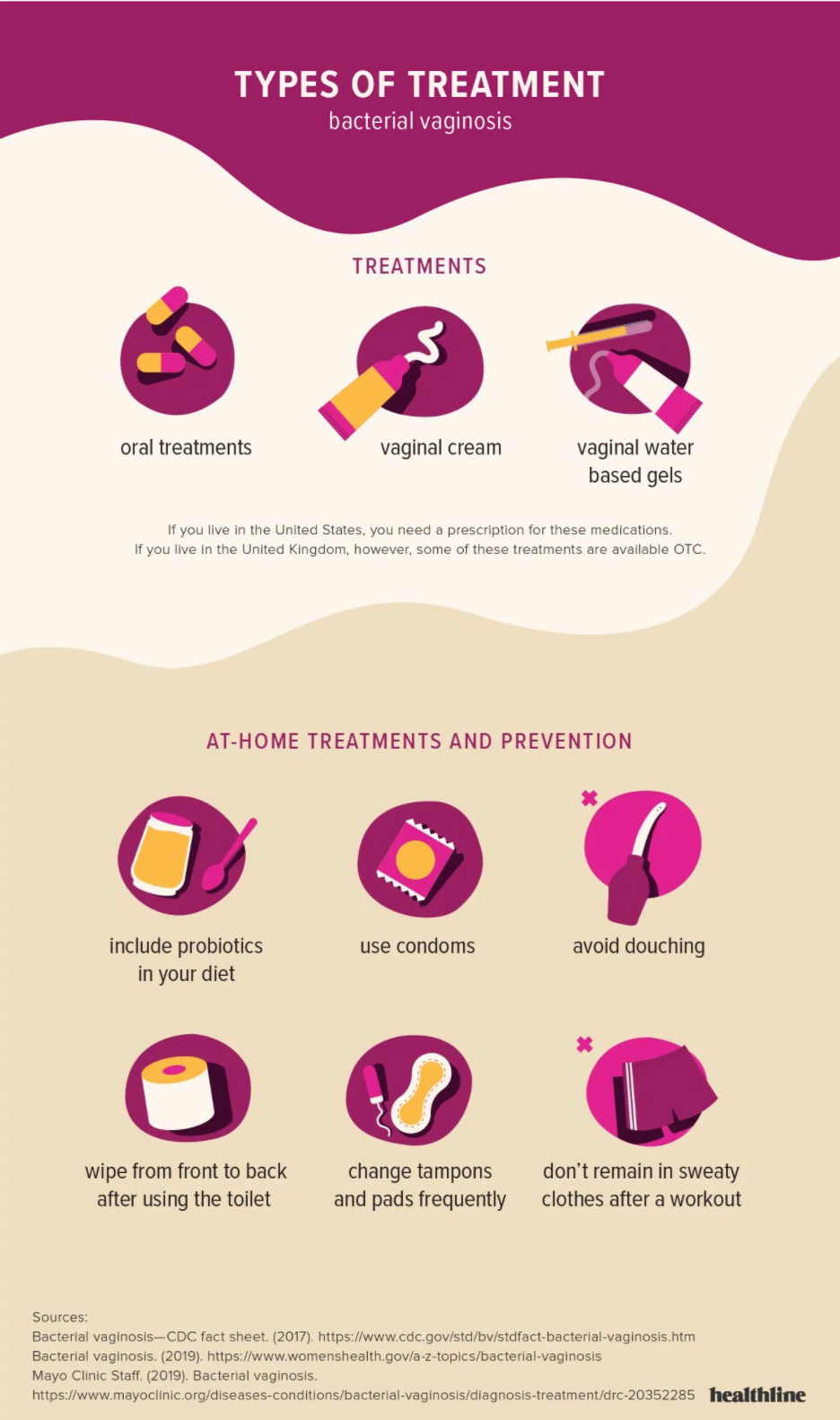 Breastfeeding mothers need to avoid high doses of metronidazole as it may affect the taste of the milk. Clindamycin is also available as a topical treatment and the cream is applied topically in the vagina. It can weaken the effectiveness of condoms so caution needs to be taken.

Another treatment option is lactobacillus colonization therapy, that focuses on elevating the level of lactobacilli in the vagina and attempts to revert the vaginal environment to normal. According to the conducted studies that show that probiotic therapy can also prove to be beneficial for its treatment, more research on this matter needs to be done.

While the prevalence of Bacterial Vaginosis is high, some preventive measure can reduce the risk of contracting this infection. They include practising safer sex, avoiding IUDs, unscented condoms, hence reducing the exposure to new and possible exposure to harmful bacteria. Other strategies include stopping the douching of the vagina, using mild soaps, unscented pads and tampons and their regular changing as leaving them on can alter the vaginal pH making the environment favourable for BV to develop.

To conclude, although Bacterial Vaginosis being the commonest infection of the vagina in the reproductive age of the women is not considered a serious disease or condition as it can be easily prevented or treated. Going to the physician timely and confiding in your partner about the situation can further simplify the situation and can smoothly lead back to a healthy body.