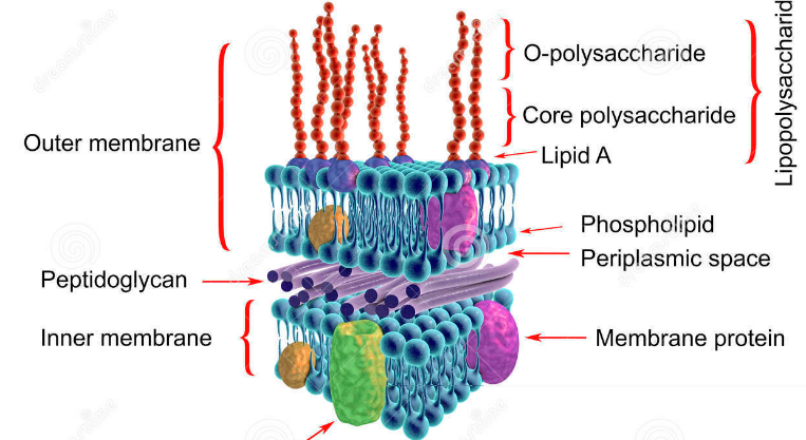 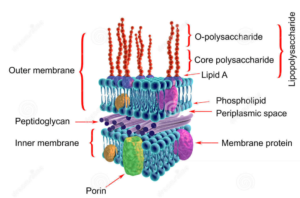 Peptidoglycan is the monomeric form of carbohydrate that is only found in bacteria only. They are the complex polysaccharides that synthesize the cell wall of bacteria. This peptidoglycan is the polymers of sugar and amino acids. The carbohydrates that are N-acetylglucosamine and N- acetylmuramic acid are linked with the amino acids. Three to five peptide chains linked the sugar and protein together. These amino acids are homopeptide and are similar to each other. These polymers combine to give the structure of the bacterial cell wall. Gram-negative bacteria have a low content of peptidoglycan. They have a thin layer of peptidoglycan that is present in the cell wall. Gram-positive bacteria have a high content of peptidoglycan that is present in their cell wall.

Peptidoglycan is present in the bacterial cell wall as a crystal lattice form. Two amino sugar chains are present which are called N-acetylglucosamine (NAG) and N-acetylmuramic acid (NAM). These NAM and NAG units are linked with the three to five linker peptides. These units are cross-linked with the amino acids residues. These cross-linked amino acids are oligopeptide. Peptidoglycan monomers are synthesized in the cytosol of the bacterial cell. These monomers are synthesized by the bacterial enzymes that are present in the cytoplasm. Bactoprenol are the transporter proteins that transport the monomers of peptidoglycan to the cell wall. These monomers arranged themselves in the cell wall and prepare the cell wall for bacteria.

The synthesis of peptidoglycan is inhibited to stop the growth of bacteria. The bacterial infection stop and its inhibition give bactericidal effect to the organism. It is inhibited by various ways;

The outer membrane is present in gram negative bacteria that surround the cell wall of bacteria. This membrane is composed of lipoprotein, lipopolysaccharides and phospholipids. The lipopolysaccharide is composed of two portions i.e. polysaccharides and lipid A portion. Lipid A portion of this membrane is an endotoxin in nature. This endotoxin is the distinguishing feature of gram-negative bacteria. The lipid A portion induces fever and shock by lowering the blood pressure of the whole body. Vasodilation of the blood vessel occurs when the whole BP of the body becomes low. This can cause the death of the organism.

This membrane has many pores that are called as porins. Porins are permeable lipo-proteins and allow the transportation of substrate and nutrient to move in the cell. These porins can either be selective or non-selective. Selective porins allow the transportation of selective substances while non-selective porins allow any substance to move in the cell. The outer membrane has many structures that help the bacteria to attach to the surfaces.

Periplasmic space is the area between the outer membrane and cell wall that is present in gram negative bacteria. This space plays a vital role in the bacteria as it stores macromolecules. Macromolecules help in the metabolism of the cell and environmental response. It contains many binding proteins that bind amino acids, vitamins, iron and enzymes. These substances are essential for the nutrition of bacteria.

Teichoic acid is present in the gram negative bacteria cell wall. It is present in minute quantity and present as lipo-teichoic acid. These are polymers of polyglycerol that are supplemented with phosphates and some sugar residues. Their function is unknown up till now. Some theories revealed that they are essential for the assembly of peptidoglycans monomers in the cell wall.

Bacteria synthesize the Penicillinase enzymes that degrade the penicillin ring. Penicillin antibiotic activity depends on the beta-lactam ring. When the ring are broken by enzymes, its activity stop and bacteria survive in the environment.

Bacteria have some modified proteins that pump the penicillin out from the cell. when penicillin moves out, bacteria survive and able to grow.