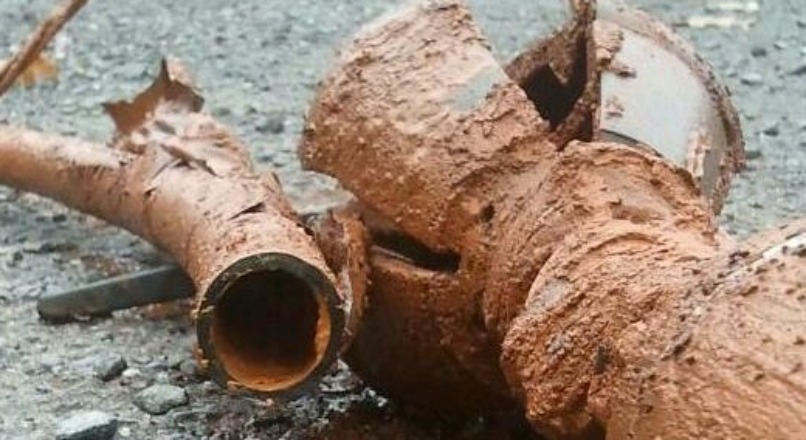 These are the bacteria that can use iron and manganese from the water. These bacteria combine the oxygen and iron of the water and deposit it in the form of rust in water.

Iron bacteria obtain energy by oxidizing dissolved ferrous iron. The ferric oxide that produced, as a result, is insoluble, and appears as brown gelatinous slime and also appears as rust on the surfaces. Fe+2 are not stable in the presence of O2 at neutral pH and are rapidly oxidized to the insoluble Fe+3. 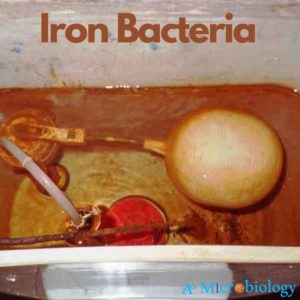 Thiobacillus ferrooxidans plays an important role in active oxidative corrosion. These bacteria oxidize sulfur compounds present in the water into sulfuric acid. This sulfuric acid released from the cells may attack alloys. Similarly, organic acid-producing bacteria and fungi may also carry out similar mechanisms. Acid-tolerant bacteria are capable of Fe0 oxidation. Thiobacillus ferrooxidans is the most common bacterium that is present in the soil. Thiobacillus ferrooxidans is able to oxidize Fe+2 to Fe+3. However, the growth of the organisms is very slow. Sulfate is required by the Fe-oxidizing system of T. ferrooxidans and is probably required to stabilize the Hexa-aquated complex of Fe+2 near the surface of the bacterium as a substrate for the iron-oxidizing enzyme system. The electrons removed from Fe+2 are passed to periplasmic cytochrome c. The reduced cytochrome c binds to the outer plasma membrane of the cell, allowing transport of electrons across the membrane to cytochrome oxidase located in the inner membrane.

This bacterium is also present in well water. This bacterium is capable of taking up complex Fe+3 from the surrounding. These bacteria transform the complex iron into magnetite Fe3O4. This is done by reduction and partial oxidation reactions. These magnetite crystals are single-domain magnets and they are aligned inside the bacteria cell. These crystals play an important role in bacterial orientation to the two magnetic poles of the Earth in natural environments. However, magnetite can also be formed extracellular in the environment by some non-magnetic bacteria. However, the role of these bacteria in metal corrosion is still unknown.

There are many clues for detecting the bacteria

Iron bacteria often produce unpleasant tastes and odours commonly reported as: “swampy,” “oily or petroleum,” “cucumber,” “sewage,” “rotten vegetation,” or “musty.” The taste or odor may be more noticeable after the water has not been used for some time. Iron bacteria do not produce hydrogen sulfide, the “rotten egg” smell, but to create an environment where sulfur bacteria can grow and produce hydrogen sulfide.

Iron bacteria will usually cause yellow, orange, red, or brown stains and coloured water. It is also sometimes possible to see a rainbow coloured, the oil-like sheen on the water.

Iron bacteria produce a sticky slime which is typically rusty in colour but may be yellow, brown, or grey. A feathery or filamentous growth may also be seen, particularly in standing water such as a toilet tank.

Iron bacteria can be introduced into well during drilling, repair of well, and services of well. Control and treatment techniques include the method due to which the iron bacteria are removed or reduced from well water. Iron bacteria can be removed by using three methods. The methods include physical removal, pasteurization, and chemical treatment.

Physical removal is the mechanical method that is used to clean the well. It is typically done as a first step in heavily infected wells. In this method, the pumping equipment in the well must be removed and cleaned. The good casing is also scrubbed by the use of brushes or other tools. This physical removal is then usually followed by chemical treatment.

Pasteurization is a common method that is used to remove bacteria by using heat processes. This method has been successfully used to remove and control iron bacteria from well water. This method involves a process of injecting steam or hot water into the well and maintaining water temperature in the well of 60°Cfor 30 minutes. This method can be effective; however, this process may be expensive.

Chemical treatment is the most commonly used iron bacteria treatment technique. The chemical method includes the addition of chemicals into the water system. There are commonly three groups of chemicals that are typically used to control bacteria. These chemicals include:

These are detergent-like chemicals such as phosphates. They are generally used in conjunction with other chemical treatment. It is important to use chlorine or another disinfectant if phosphates are used, since bacteria may use phosphates as a food source.

These acids have been used to treat iron bacteria because these acids can dissolve iron deposits, they can destroy bacteria, and they are responsible for loosening bacterial slime. Acids are typically part of a series of treatments involving chlorine, and at times, bases. But, there should be extreme precaution is required to use and properly dispose of these chemicals. These acids and chlorine should never be mixed together. Acid treatment should only be done by trained professionals.

Disinfectants are the most commonly used chemicals for treatment of iron bacteria, and the most common disinfectant is household laundry bleach, which contains chlorine. Chlorine is relatively inexpensive and easy to use, but may have limited effectiveness and may require repeated treatments. Effective treatment requires sufficient chlorine strength and time in contact with the bacteria and is often improved with agitation. Continuous chlorine injection into the well has been used but is not normally recommended because of concerns that the chlorine will conceal other bacterial contamination and cause corrosion and maintenance problems