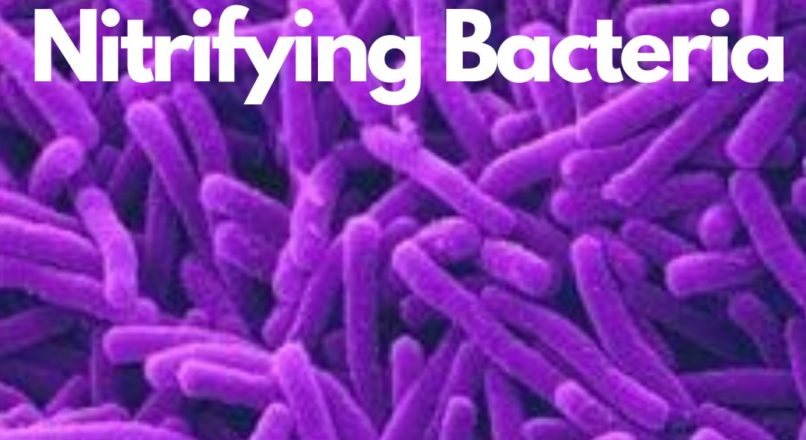 Nitrogen in the form of N2 makes 78% of the atmosphere. It makes up the structure of living organisms. Nitrogen is present in proteins and DNA of living organisms. But despite such an abundance of nitrogen in nature, it is a limiting nutrient. Nitrogen in from of N2 is useless for living creatures. So, how do living organisms get Nitrogen for their needs? How it enters in a food chain? The answer is through the nitrogen cycle that involves different bacteria. One of the crucial bacteria of the nitrogen cycle is nitrifying bacteria. In this article, we are going to look into the general aspects of nitrifying bacteria.

What are nitrifying bacteria?

These are the types of bacteria that oxidize ammonia (NH3) into nitrite NO2-. Examples include Nitrosomonas and Nitrosococcus.

Nitrifying bacteria that oxidize nitrite (NO2-) into nitrate (NO3-) are called nitrite oxidizers. Examples of nitrate oxidizing bacteria include Nitrobacter, Nitrococcus, Nitrospira, and Nitrospina.

So the question arises, how do the nitrifying bacteria convert inorganic compounds of nitrogen (mainly ammonia) to nitrates?  Many enzymes associated with nitrifiers are vital players in nitrification.

Conversion of ammonia to nitrites:

This step uses two enzymes called ammonia monooxygenase and hydroxylamine reductase. First, membrane bound monooxygenase converts ammonia into hydroxylamine. The reaction utilizes oxygen and a source of reduction. It is an endergonic reaction.

Then hydroxylamine is converted into nitrate by the enzyme hydroxylamine reductase. It utilizes water as a source of hydrogen. It is an exergonic reaction.

The redox potential for ammonia to nitrate reaction is -340mV.

Conversion of nitrites to nitrate:

The next step involves nitrite oxidoreductase that converts nitrite into nitrate. The redox potential for this reaction is 430mV.

Why are nitrifying bacteria important?

Many inhibitors tend to stop the process of nitrification, thus slowing the nitrification rate. A prominent example is metals. Metals drastically decrease the rate of nitrification. With the presence of more than one inhibitor, an increase of inhibition is more noticeable.

Change in PH dramatically influences the rate of nitrification. The optimal PH at which nitrifying bacteria perform nitrification is 8-9.

Nitrifiers are sensitive to low oxygen concentration. In an aquatic environment, the optimal reaction occurs with 0.3 to 4 milligram dissolved oxygen per liters.

We place our pet fishes in an aquarium and feed them. But have you ever wondered, how do they survive in the aquarium? Where does the waste material of fishes go? Ammonia is present in large amounts in the aquarium as a result of fish waste products. Accumulation of ammonia in unionized form can be a danger for fishes life. Its concentration above 0.1 milligrams per liters can even cause death. Here comes the role of nitrifying bacteria. It first converts ammonia into nitrites and then into nitrate. That’s why our aquarium systems are designed in such a way to support the growth of nitrifiers. These bacteria grow on concrete surfaces in the aquarium, such as gravel, rocks, and ceramic. Nitrobacter and Nitrosomonas are generally used in the aquarium to remove nitrogen waste.

Wastewater consists of 99% fluid and 1% dissolved or suspended materials.  Wastewater is a combination of detergents, grease, plastic, oils, and metals. It also contains an excess of nitrogen and carbon pollutants. There are many stages of wastewater treatment. One of them is a biological treatment to removes nitrogen, carbon, and organic matter from water. As the name suggests, it utilizes microorganisms, and to remove nitrogen, nitrifying bacteria play the role. Nitrifying bacteria convert ammonia into nitrates by a two-step process. But the vital point to note here is that nitrifying bacteria are not enough to remove nitrogen. Nitrates are the primary cause of Eutrophication. To remove nitrates, denitrification bacteria convert nitrates into free atmospheric oxygen. Other than denitrification, many physical processes are involved that include reverse osmosis (remove solid masses by applying pressure that allows only liquid to pass through semi-permeable membrane) and electrodialysis.

Syeda Shah is a self-motivated freelance writer. She believes that writing is a tool to change mindsets.